The Epilepsy-Aphasia Spectrum: From Landau–Kleffner Syndrome to Rolandic Epilepsy written by Thierry Deonna and Eliane Roulet-Perez

Published in Developmental Medicine and Child Neurology, May 2017 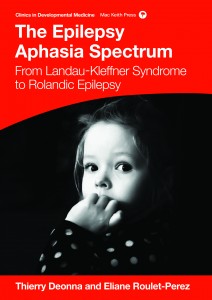 The experienced authors of this book are to be commended for their comprehensive overview of the epilepsy-aphasia spectrum, which presents a challenge in both identification and management despite having been described for decades. The book is illustrated with many case studies that enrich the more academic content and provide a resource for future hypothesis-driven research. A particular strength is the longitudinal follow-up into adult life of many cases originally presenting in childhood and the emphasis on the ‘whole person’; hence, this book is appropriate for primary care physicians, paediatricians, neurologists, psychiatrists, allied health professionals, and educationalists.

The senior author, Thierry Deonna, has a lifelong interest in Landau–Kleffner syndrome (LKS) and rolandic epilepsy, and with co-author Eliane Roulet-Perez has contributed many original papers and chapters on these and other epileptic syndromes. Landau–Kleffner syndrome is a rare but severe example of the idiopathic epilepsy-aphasia spectrum in which speech and language deficits are the hallmark. It is a spectrum which varies in age of onset, anatomical localization, and behavioural and neuropsychological manifestation. Although first described many years ago, the elucidation of clinicopathological correlates has taken a long time to be determined, though the mechanism remains speculative. This is particularly so for the concept of epileptic encephalopathy, in which the epileptic activity itself (ictal and interictal) contributes to the cognitive and behavioural impairment beyond the underlying pathology (described in Chapter 11 by De Tiège et al.).

The book itself is naturally divided into sections that allow a logical flow. Chapters 1 to 3 provide an introduction to encephalopathy in LKS and the epilepsy-aphasia spectrum, and the wider neurodevelopmental sequelae. This section provides a useful window into the complexity and multiple facets of these clinical differential diagnoses. The heterogeneity inherit in these conditions is then exemplified by the helpful explanations offered. Landau-Klefner syndrome (acquired aphasia with electro-clinical features of rolandic epilepsy) is contrasted with epilepsy-aphasia spectrum with and without a structural lesion; vs epileptic encephalopathy with continuous slow wave in sleep; vs atypical childhood epilepsy with centrotemporal spikes. These early chapters highlight the developmental, language, cognitive, behaviour, and electro-clinical spectrum of the epilepsy-aphasia spectrum.

Chapters 4 to 8 provide insights into possible models of language impairment in LKS. Here again the wide phenotypes are exemplified by different involvement of speech and language deficits, cognitive, behavioural, motor, and neurodevelopmental comorbidity. The variability in onset, course, and fluctuation is carefully described. Despite the paucity of multiple assessments and longitudinal data in the literature, the book expands on current knowledge of significant long-term impairments.

The book also points out the need for different models of electroencephalogram changes in order to understand pathophysiology in the continuum of epilepsy-aphasia spectrum (from rolandic epilepsy to LKS). Such knowledge is vital in order to help predict clinical course and outcome.

Chapters 9 to 11 highlight the utility of investigations, particularly the recent emergence of the GRIN2A gene, which has been reported in 8% to 20% of LKS cases. This section details the likely further genetic and aetiological variations. In addition, the authors address the possible role of autoimmunity, given the reported response to steroids and immunoglobulin. The book discusses the proposed pathophysiological mechanisms in LKS and epilepsy-aphasia spectrum, which contribute to language, cognitive, memory, oromotor, and motor deficits.

The future role of advanced neuroimaging is discussed as well. Chapters 12 to 15 expertly describes pharmacological and non-pharmacological interventions, before the book is skilfully concluded.

We envisage The Epilepsy-Aphasia Spectrum: From Landau-Kleffner Syndrome to Rolandic Epilepsy as a useful resource for clinicians seeking the history and current understanding of one group of complex epilepsies. The work further illuminates the association of these epilepsies with neurodevelopmental and behavioural impairments, and indicates what we have learned and what more there is to learn in this field.