Nine months on from publication, Early Detection and Early Intervention in Developmental Motor Disorders editor Mijna Hadders-Algra reflects on the key themes and insight from their book.

What are the core themes of the book?

The core themes of the book are – as the book’s title indicates – early detection of and early intervention in developmental motor disorders. The book focuses on the first 1,000 days of life. It covers the prenatal period and the first two postnatal years when the brain undergoes rapid and dynamic developmental changes. Recently, there has been a stronger emphasis on identifying infants that will go on to have developmental disorders as early as possible, so that the proper guidance of infant and family can be started. In clinical practice, this can be difficult. The book aims to teach practitioners about the tools assisting early detection, the strategies associated with better outcomes, and the potential opportunities and challenges imposed by the developing brain.

How is the book structured?

Why did you write the book / why is it needed now?

During my teaching on early detection and early intervention I realized that a book that overviewed early detection and early intervention was lacking. Presumably this lack was due to the limited knowledge in the field in last century. But recently knowledge increased rapidly. It was clear: it was time for this book, that covers the whole range from developmental neuroscience to the participation of child and family in daily life.

Who will benefit most from reading the book?

What was the main highlight or experience you had whilst writing this book?

During the writing of the book, I once again realized how much I had learned from the families that allowed me to do embedded research. The families had an infant with a major lesion of the brain that resulted in the diagnosis of CP. They allowed me to be present in their home during major parts of many days during their child’s development. Observation of the daily care giving practices and the conversations with the family members about the many aspects associated with raising a child with a developmental motor disorder, including grief, joy and the many hassles and time consuming daily practicalities, formed the basis of this book.

Mijna Hadders-Algra is professor of Developmental Neurology.  Her research focuses on 1) early detection of developmental disabilities, 2) early intervention, 3) significance of minor neurological dysfunction (MND) in children with DCD, learning- and behavioural disorders, 4) pathophysiology of motor impairment in children with cerebral palsy or DCD. 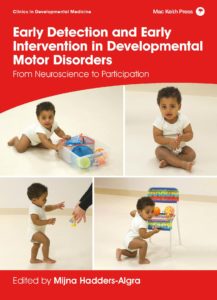 
More posts by the same author

Volcanoes in Iceland: How it all started with SINDA

Volcanoes in Iceland: How it all started with SINDA In this blog post, Mac Keith Press author, Mijna Hadders-Algra reflects on how her upcoming book, SINDA: Standardized Infant NeuroDevelopmental Assessment was conceived and how an Icelandic Volcano pl …

More from the blog