Holly kindly contributed a chapter to the book on the lived experience of young people with vision impairment which made for both an engaging and highly insightful written piece.

Children with Vision Impairment: Assessment, Development, and Management is due for publication on the 15th December 2021 and is available for pre-order in both paperback and digital.

Naomi: Hi there, Holly. It’s great to speak to you again. I just want to say thanks for contributing to the book. It’s such a wonderful addition and very insightful.

Holly: Thank you for letting me contribute. It’s an incredible feeling to be able to say that I’m an officially published author! …well, almost!

Naomi: Yes, almost! We should be publishing this week. I know my fellow editors are just as excited as you are. It’s been several years in the making, but the final book proofs look fantastic. We can’t wait to share it with everyone.

What I’d like to know – and I think the readers would like to know too – is a bit more about you and how you got involved in the book?

Holly: Well, my name is Holly Tuke, I’m a disability blogger, freelance writer and Social Media Officer. I am registered blind due to a condition called Retinopathy of Prematurity, as I was born at 24 weeks. I’m also a massive music fan and a bit of a bookworm.

Naomi: A bookworm? Not too surprising you’ve ended up becoming an author then!

Holly: Yes, definitely! I got involved in the book as I was contacted by one of the authors who had come across my blog, and thought I’d be a good fit for the chapter on young person’s experience of vision impairment. We exchanged a number of emails and discussed the book and the specific chapter in more detail, I then made the decision to write the chapter!

In this photo, Holly Tuke is standing in front of Edinburgh Castle which rises up behind them. Holly is wearing a back blouse with white spots and a necklace. To their right, tourists enter the Edinburgh Castle via the entrance/gatehouse. Above the gatehouse is the royal crest of Scotland, a red lion on a yellow field.

Naomi: And we are very grateful you did. Not only including lived experience but listening to the voices and experiences of people (and children) with visual impairment was immensely important to us when writing the book. I’m glad that you were kind enough to be part of that process.

Obviously, we want people to read the book, but if you could sum up some of the core messages in your chapter, what would they be?

Holly: Listening and learning from people’s lived experiences is vital, so I’ve tried to encompass some important messages about that in my chapter.

The first being how important it is to listen to blind and vision impaired people. Take note of what we’re saying.

Holly: Another core message of my chapter is that every blind or vision impaired person is different. What works for one person doesn’t mean that it’ll work for another. Vision impairment is a spectrum, it does not fit into a box.

I’d say that one of the most important messages of my chapter is reiterating the fact that blind and visually impaired people can lead normal, independent lives. We may do things differently, but we can still shape our life the way we want it to be.

Naomi: Thank you. Yes, I couldn’t agree more. It’s so important to keep highlighting that everyone with visual impairment is different and the experiences of vision impairment and just disability in general, are unique to the person. I imagine your own life experiences helped shaped your chapter too?

Holly: My chapter is a true reflection of my life. It’s real, honest, and straight from the heart.

I’ve discussed some of the most pivotal moments that have helped me get to where I am today including my experiences of mainstream education, university, and employment, as well as my hobbies and interests.

When writing the chapter, I thought about what I wish I’d known when growing up with a vision impairment, what my family wish they’d known, as well as my interactions with professionals in the field.

The whole chapter is based on my lived experiences of being a blind person. In fact, it shaped every aspect of the chapter.

Naomi: Yes, you can really see that in the writing, and I expect readers will find it quite impactful to read. As a professional, I learned so much from your chapter which will change my own practice. I want to say again how great a chapter it is – so honest. Thanks again, Holly.

Naomi: Before we close off, I wonder if I might also ask you what you’re doing aside from the book? I understand you do work for a charity and run a successful blog?

Holly: That’s right. I work as a Social Media Officer for a charity that’s extremely close to my heart. Working in communications within the charity sector is something that I’ve had my sights set on for years, but I never thought it would actually happen.

Alongside my job, I spend a lot of time tapping away at my keyboard putting together a blog post for my blog ‘Life of a Blind Girl’ or an article for another publication or website. I also use my social media platforms to share my experiences of living with a vision impairment, raise awareness and educate society.

I also present a show on RNIB Connect Radio on mental health and wellbeing.

So, as you can tell…I’m a busy woman!

Naomi: Gosh, you certainly are! I don’t know where you found the time to contribute! You are happy you did though?

Holly: Of course. Having the chance to contribute to the book has been fantastic, it’s something that I’ll never forget. As a bit of a bookworm, it has been really interesting to see the other side of the bookish world, from the creation and publishing side of things.

Being an author of a chapter in a book is definitely a ‘pinch-myself’ moment!

Life of a Blind Girl 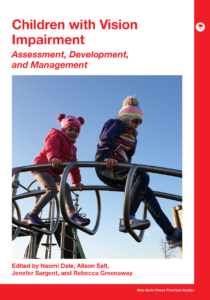 More from the blog