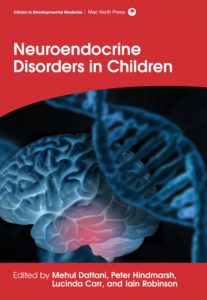 Sir Walter Langdon-Brown ( 1870-1946) is regarded as the founder of clinical endocrinology. He first referred to the pituitary gland as the leader in the endocrine orchestra in 1931 (1). This musical analogy subtended the title of the Royal College of Physicians Langdon-Brown named lecture delivered in 1960 by another giant of British endocrinology, Douglas Hubble (2). But an orchestra generally requires a conductor to wield the baton and that is firmly identified now as the hypothalamus and its allied specialty of neuroendocrinology.

There is no better example of the key role of the hypothalamic-pituitary system in homeostasis than in the development of the infant and child in to mature adulthood. This is encapsulated in an excellent monograph on Neuroendocrine Disorders in Children edited by Mehul Dattani and colleagues in the series of Clinics in Developmental Medicine. The hypothalamic-pituitary unit produces trophic factors that control classic endocrine glands such as the thyroid, adrenals and gonads so that it is legitimate to include chapters on these organs. However, the editors in addition have cleverly addressed the control of homeostasis in reverse order by including the effects of the products of those glands on the brain itself. For good measure, obesity, the 21st century exemplar of pleiotropic morbidity is now included as a neuroendocrine disorder.

The GH-IGF1 axis is given a comprehensive airing with pulses galore of GH depicted to illustrate this unique physiological sleep-related phenomenon that entrains childhood growth. Is the staccato pulse of GH more physiological than the pragmatic daily injections used to treat the GH-deficient child? GH and IGF1 have effects on cognitive and memory function, although this is not a panacea for improving quality of life with ageing. Nevertheless, there is evidence for the neuroprotective effects of IGF1 and regenerative effects in hypoxic-ischaemic injury to the brain. The GH-IGF1 system is complex and challenges the reader to explore further how the physiology works. That is not the case with chapters relating to the thyroid which describe the relatively straightforward hypothalamic-pituitary-thyroid axis and how newborn screening for congenital hypothyroidism with TSH is so simple and effective. The chapters are neat and self-contained, akin to a Mozart or a Haydn symphony.

The adrenal section emphasises the unique feature of a circadian rhythm for the hypothalamic-pituitary-adrenal unit and the role of endocannabinoids in the stress response. There is also a brief lesson on philosophy to describe how the ancient Greek philosophers referred to the harmonious, non-stressful forms of life. Readers can test themselves to define curious terms such as cacostasis, hyperstasis, isonomia, eustatheia or eustasis, the latter referring to that serene and satisfactory emotional state of harmonious balance in a human being.

Standalone chapters on adrenoleucodystrophy and Cushing’s disease in children are models of clarity.

There is a magnum opus within this monograph; the paired chapters on the hypothalamic-pituitary-gonadal axis with its partner on hypogonadotropic hypogonadism. It is of Wagnerian proportions, occupying 72 pages or 18% of the total production. It is packed with facts, including Table 19.2 which occupies a remarkable five pages to summarise the genes associated with hypogonadotropic hypogonadism. Hormone pulses are to the fore again, with classic negative feedback loops characteristic of the male as opposed to both negative and positive loops operating in the female. Of course, puberty and its variants are central to a section on the conductor and leader’s role in this particular section of the endocrine orchestra. To this day, THE key spark as to why puberty starts around 11 years of age (why not 5 or 15 years?) has not been elucidated. The hypothalamus is certainly the generator of hormone pulses that kick start puberty search. A mutation in an interesting gene, MKRN3, identified in familial and sporadic precocious puberty appears to act as a brake on puberty developing in childhood. However, this and the study of other genes associated with abnormal puberty does not explain what controls the timing of puberty onset in the normal child. Specialists in developmental medicine will be familiar with the earlier onset of puberty which may occur with cerebral palsy or following an acute head trauma in children. It would have been apposite to have had a specific chapter on this topic and its management for a monograph in the series Clinics in Developmental Medicine.

Is obesity a neuroendocrine disorder?

Is obesity a neuroendocrine disorder? The section on regulation of appetite and weight certainly makes a persuasive argument for it. The hypothalamus is described as the body’s master endocrine and metabolic coordinator by regulating energy intake, expenditure and storage. A hypothalamic-leptin-melanocortin pathway is now established. The hypothalamus also connects to the gut via a family of gut hormones that act in paracrine fashion via the afferent vagus nerve together with leptin signals from adipose tissue to feed-forward mechanisms of digestion and feed-back mechanisms of satiety. How neat is that?! Genetic syndromes of obesity account for only about 5% of the causes yet their study has revealed important information about the mechanisms of weight regulation and satiety and the potential for pharmacological treatments. The first identified case of leptin deficiency in obesity was prismatic; the illustration in Figure 10.3 must surely be the most dramatic documented change in body size following treatment with leptin injections. Was this now going to result in treatment for the 95% of persons with ‘simple’, exogenous obesity? Unfortunately not, as leptin levels are normal according to fat mass and simple obesity is resistant to leptin treatment.

A book on neuroendocrinology has even managed to cover some diabetes by informing the reader that brain energy consumes 25% of total body glucose utilisation, aspects which are highly relevant to children with Type 1 diabetes and prone to recurrent hypoglycaemic episodes. Insulin also has central actions and crosses the blood-brain barrier. It ‘orchestrates’ the body’s response to availability of anabolic substrates. Other chapters include: the physiology of salt and water balance, with clear and practical advice on how to manage diabetes insipidus and the tricky syndrome of inappropriate ADH secretion; the extent of damage to the hypothalamic-pituitary unit from the late effects of cancer treatment; a comprehensive review of the aetiology, pathogenesis and management of craniopharyngioma; and a chapter on how gonadal steroids, particularly androgens, play a role in sexual differentiation of the brain and behaviour.

So how did this particular endocrine orchestra perform? The conductor and leader galvanised an outstanding group of players to produce an eclectic programme of traditional and some avant garde pieces delivered in style. All players are of first desk calibre. If there is any criticism, it is levelled at the visual production where the lack of colour illustrations (bar four figures from the total set of black and white figures bizarrely replicated in colour in an appendix) occasionally makes the reading heavy-going. The lack of colour particularly detracted from the value of having an illustration of the clinical features of Cushing’s syndrome. These aspects aside, this is a superb book on neuroendocrinology which, by its choice of topics and detailed content, is effectively a book on the entirety of endocrinology. Perhaps this is a message the editors want to deliver! The book will appeal to a wide audience, young and old, and across the spectrum of health professionals caring for children with endocrine problems.

Why not download Chapter 1 for free from our free ebook library?